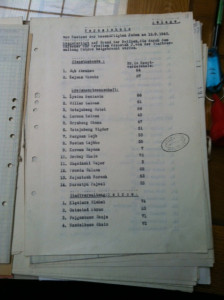 Up until the last months of 1942 there were also in Ostrów “Arbeitsjuden” (working Jews), people sent to Ostrów from nearby labor camps and perhaps even a few locals with special permits to work. In Archiwum Miasta Stołecznego Warszawy some days later I construct the history of the last of them — 89 “working Jews” who had been sent from Wengrow to Ostrów – through the bureaucratic exchange of memos that ends in their death.

In the name of the labor council, we are sending over 50 men to work. The group leaders are Gora Jankiel and Emanuel Zelman from Wengow. Because we know very little about the accommodation and care that is going to be provided we are requesting …”camp like condition.”  Four policemen who are going to accompany them, and these four are also Jewish. We are asking that these four receive a return pass.

Valid from August 22- Sept 1. The Jewish group leader Speilmannn Kellman, who in Ostrów is the leader of a group of Arbeitsjuden is allowed to travel by train to Wengrow to bring the laundry and the work stuff for the here employed Jews. In addition Speilmann brings 22 Jews.

If there are two tailors among the column of workers, send me urgently to me.

To: Leader of the labor in Siedlce (outskirts of Ostrów)

Regarding Jewish workers for the kreishauptmanshaft, based on yesterday’s conversation with Herr Steding I ask that the following Jewish handworkers be provided as soon as possible:

2 tailors I have already taken from the Jews employed here.

The conditions under which these are going to be employed are the same as the conditions of those Jews who are working on the draining of the pond.

Sent back to the kreishauptmann in Ostrów with the note that such deployment of Jews is no longer possible.

To: Krieshauptmann of the Kreis Ostrów

From: The Chief of Security Police of the District Warsaw, Ostrów

…We learned that the ‘kreishauptmannshaft” is employing about 90 Jews who partly without supervision are doing their job so that it is possible for them to flee. Recently 5 Jews managed to escape. The identity of these Jews is not sufficiently documented so that hunting them as a result is becoming difficult… It is well known that the Jews are spreading diseases (fleckfeber-Typhus). Last year’s typhus epidemic was also due to them. There is a danger of their agitation of the local population. It is very important to make sure Jews who leave the “Ghetto” without supervision and are found wandering around are captured and punished with death. For that reason we are asking for a list of names and personal information of these Jews employed by the administration.

The memo is signed by W. Karpinski, Secretary of the Polish community. Below is a hand written note:

Herr Karpinski notifies us that the three Jews have already been captured in Sokolow- Wengrow.

Approximately ninety “working Jews” were allowed to remain alive in the district of Ostrów after November 1939; they were housed, according to the memos in a kind of “Ghetto,” though perhaps, as Rizcard and Magda maintain, it was not in the city itself. In a folder titled “Jewish Employment” I find their names, date and place of birth, professions, and spouses’ names: a list that was collected in response to the allegations of irregularities but soon after became a death order.

In a memo regarding “supplying Lager Treblinka,” dated September 6, 1942, the Governor of the Distinct of Warsaw expresses reprimands Ostrów’s administration:

I learned that the feeding of the lager Treblinka is not going in the desired way. As it is known it is fully functional and its supplying function is as unlimited as possible. I am asking you to make sure that the delinquents of your kreiss are possibly sent off to Treblinka on Wednesdays every week.

As a consequence, the pressure to account for every last Jew in Ostrow descends down the bureaucratic chain all the way to Karpinski, secretary of the Polish community at the kreis who in a frenzy of memos reports that “the group leaders Jankiel Gora and Zelman Emanuel, who were not on the original list, have left in an unknown direction” and that another man, Moses Seeman, has gone missing. And Marin Lenz, head of interior government within the Kreisshauptmann office, summarily passes the buck to “Gendarmeriezug Ostrów”: “In the list handed to me of hereby employed Jews, Moses Seeman is not to be found. He either omitted his name left or gave a false name. For this reason, arrest him as quick as possible and send him to me. Within 48 hours he will be picked up by order of the commander of the Treblinka Lager.”

On September 19, 1942, a man named Brzostek, “supervisor of the works at the city government of Ostrów,” reports that “89 working Jews have returned to Wengrow.” In an anonymous memo addressed to Herr Gouverneur Der SS, Distrikt Warchau and dated 24.11.1942, it is stated simply “there are no more operational Jews in the crew of Ostrów.” On March 13, 1943, Herr Gouverneur sends a “standard letter to all the Kreisshafts in the Warsaw region,” bearing the stamp GEHEIM (confidential), “to find all Jews and send them to liquidation.”

It is perhaps then that someone crosses out the typed heading “Jewish Employment” on the folder I am now holding and handwrites “Jewish Liquidation” instead.